Catching zzz's and catching up

Possible reasons I haven't been writing much include:

It's March.  The winter blahs are dragging on me heavily, keeping me in bed later and later and generally making me unproductive and uninspired.

We've had several field trips--including one yet to happen--that require advance planning, babysitter arranging, and a pileup of schoolwork on one hand, and a long day of driving and sightseeing and being an all-around extra-responsible adult on the other hand.

I've been unaccountably tired lately, nodding off during read-aloud time (when I'm the one reading aloud) and surviving until the next chance I can sleep.  Possibly this means I'm trying not to come down with whatever is causing the gobs of snot running down the faces of several people I live with.  For other possible explanations, see above.

What have I been doing, if not blogging or napping more than should be necessary?

Trying to convince Caleb that he's not a blue princess, as he insistently claims.

{I can't even blame my fatigue on him, since he's been sleeping fine lately.  He doesn't cry when he goes to bed; he just sings in chant to put himself to sleep.  If you listen carefully, it's a great window into his psyche.  Last night it was, "I'm a blue princess.... I am, I am....."}

I took the kids to help serve a dinner at the Salvation Army shelter, thinking it would be a good object lesson in thankfulness for what we have.  It was wonderful to see them serve the residents, but my intentions may have backfired.  "It would be great to live here!  They have a TV, and restaurant food, and a Coke machine!!"


Some of us have spent time trying to figure out how to fit four small humans in a giant box. 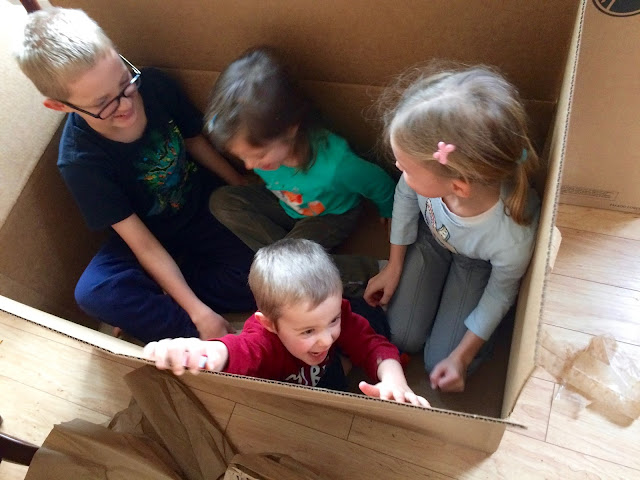 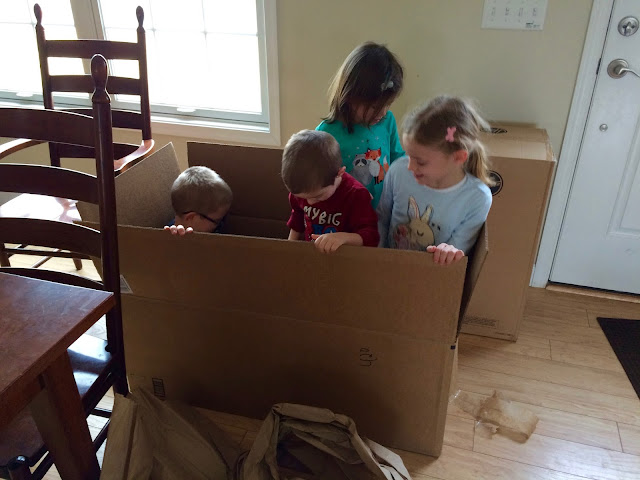 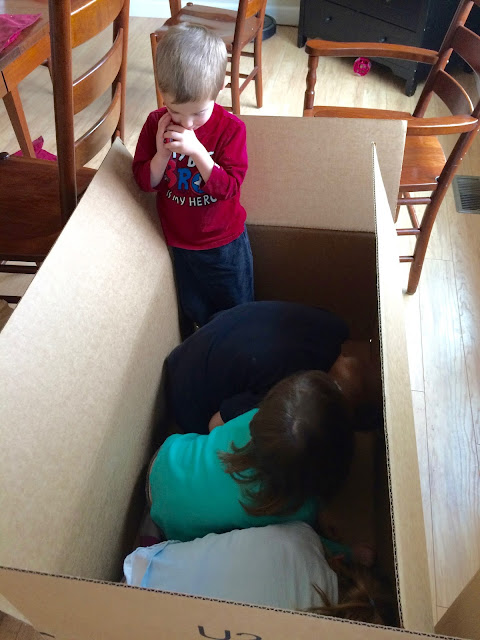 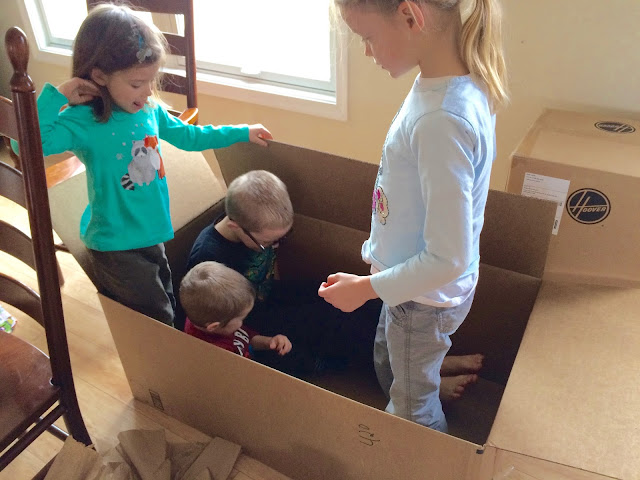 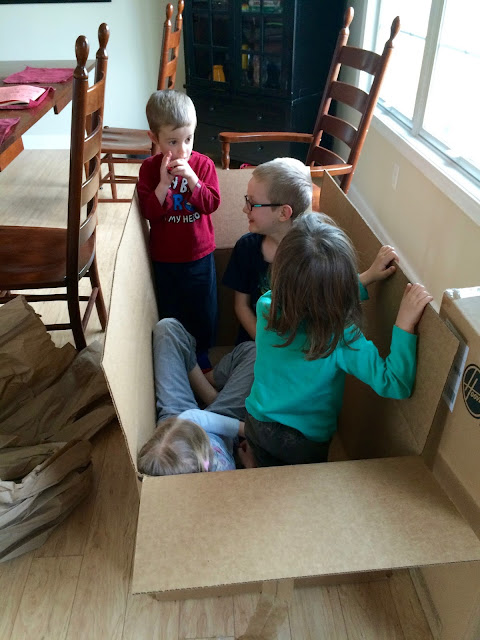 I attempted to up my running game by tearing 6 laps around the park one day.  I impressed myself with the resultant 5k time... but shortly after succumbed to the aforementioned chronic fatigue.  I suppose "overdoing it" may also be an explanation, although since then I've spent the kids' naptime, well, napping, rather than running.

I'm still working on prettying up the living room in my snatches of spare time.  It's frustratingly slow, but Jason often reminds me that I have higher priorities--and besides, it's better for our budget if I don't have time for a shopping blowout every week.

{We also did our yearly standardized testing last month.  The results are in, and we're unarguably doing something right in the realm of academics.  This, Jason points out, is proof I'm succeeding in (one of) my day job(s).}

The house-beautification effort led me to Lowe's, and through a chain of happenstances, I ended up there with two small children, my shopping finished, waiting to be picked up by Jason. 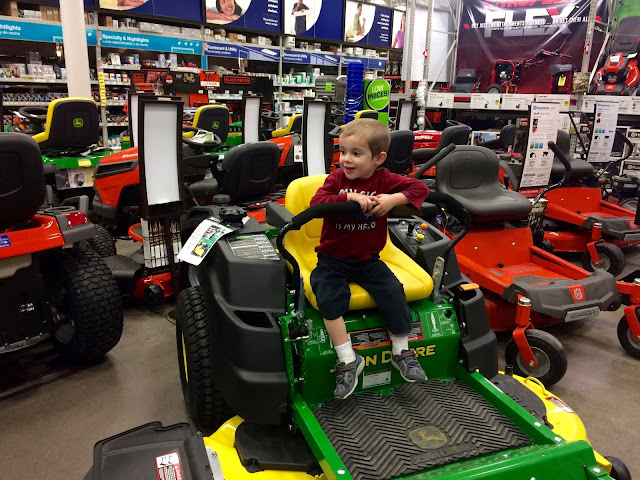 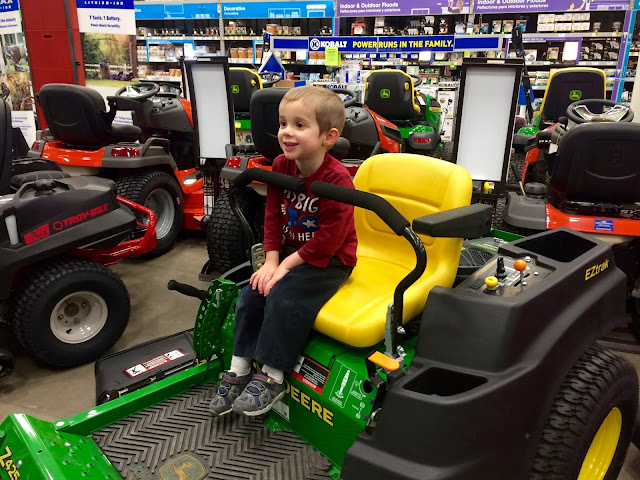 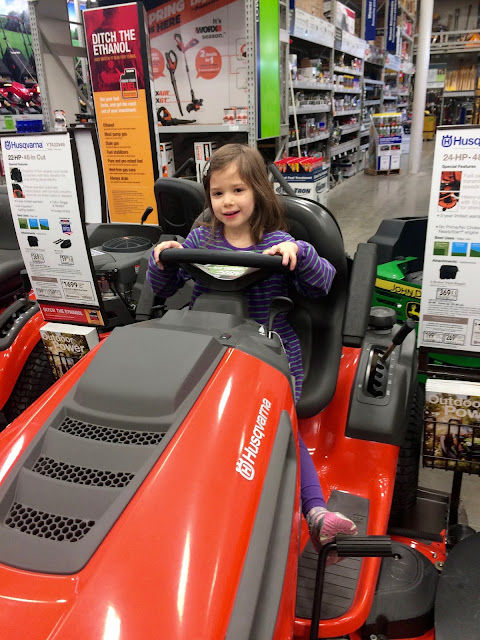 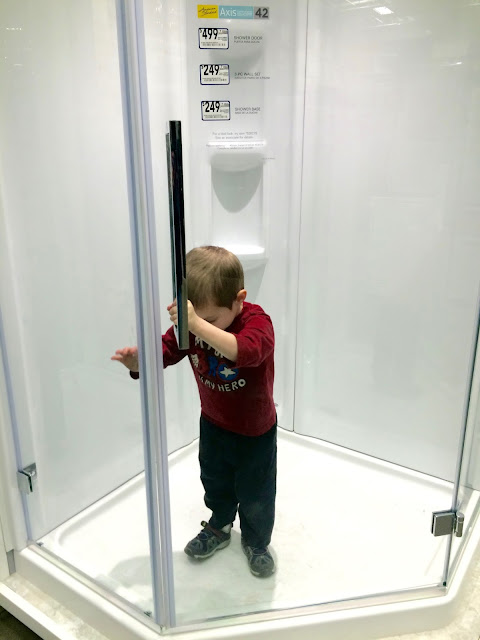 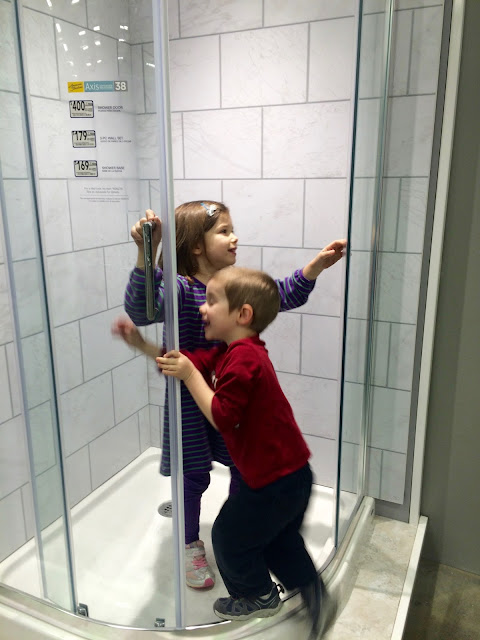 Also, Lowe's has toilets.  Floor models, sitting right out in the open.  I foolishly pointed them out, and Caleb said, "I go potty!" and rushed across the path of other shoppers, followed by me, shouting, "No! No! No!"

I'm pretty sure after that I went home and took another nap.