When we woke up on Saturday we packed our bags before heading across the street to The Smith for breakfast.  We were seated and served courteously and I reflected that during our week in New York, I only heard a New York accent maybe once--although I think we heard snippets of most of the 800 other languages spoken there.


We thoroughly enjoyed our last meal in NYC--French toast with caramelized bananas that looked like a porterhouse steak for Jason, and a BLT&E with lemon aioli on a croissant with crispy hash browns for me. 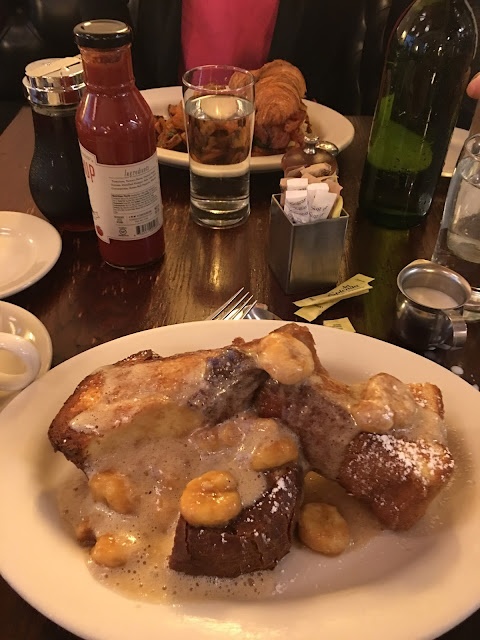 After breakfast we checked out of our hotel, took a subway back to Penn Station, and ended up on an Amtrak with legroom so ample I could stretch out my legs and lock my knees without touching the seat in front of me.


The city dropped away behind us and we headed back to open air and bucolic quiet.  Our week of foreign culture immersion was done.


We returned home wiser, savvier, and much more appreciative of personal space. 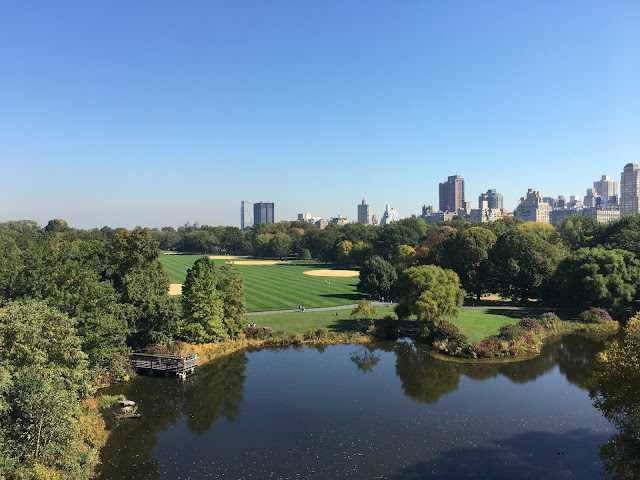 We have a park near our house.  It has 3 baseball fields and a pool and a playground.

Central Park has its own website which lists eight different categories of "things to do" and currently has 27 "featured attractions" in case the entire list is too overwhelming.  It has specific attractions listed for art lovers, fitness lovers, birders, dog owners, families, first-time visitors, history lovers, and nature lovers.

Central Park is 2 1/2 miles long and half a mile wide.  It is bigger than the country of Monaco.

We spent all morning hiking and got through one third of it.

It contains twelve different bodies of water:  four ponds, two streams, a reservoir, a cove, a bay, and three lakes.  One of the lakes is three times the circumference of our entire park. 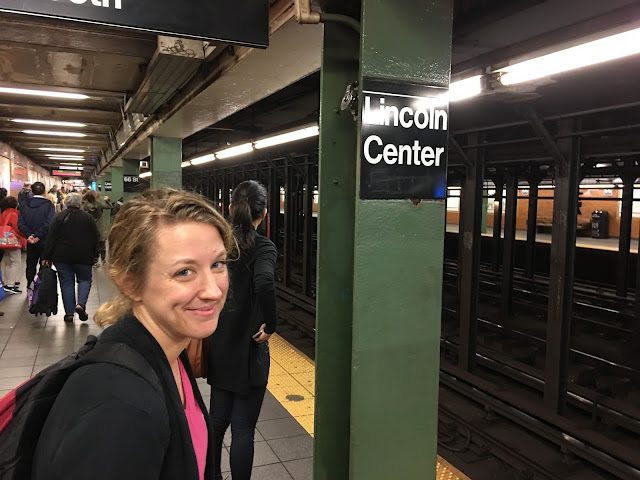 More surprising than the high cost of adult beverages was the low cost of public transportation.  No complicated fare charts like at the DC Metro--$2.75 to get on, and you get off wherever you want, no other card-swipe required.


7.  Children exist there, sometimes two at a time.


DC is the city I'm used to.  Every child in Washington, DC will be found at the National Zoo and the Natural History Museum, with a few left over for the Air and Space Museum.  I never see children on the Metro or the streets of the business/financial or residential areas.


In Manhattan I did see children, all over the place, even in the heart of the financial district.  Schoolchildren and strollers, on the streets and on the subway--and sometimes even a set of siblings, which was more surprising.  Who can afford to live in Manhattan, even alone, much less with one or two kids? 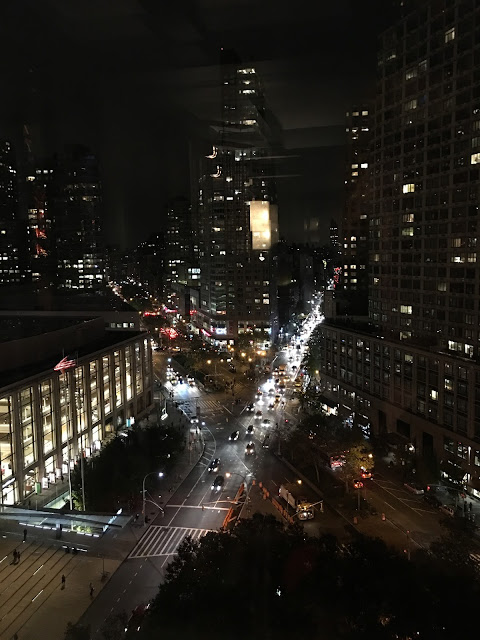 Granted, we were staying in Manhattan, but we were right next door to one of the grittiest-sounding neighborhoods of all--Hell's Kitchen.  We walked through Brooklyn after dark, and all through Soho and Chinatown and the Village at night.


According to this, Times Square is one of the least safe areas in NYC, and we were definitely there after dark, feeling perfectly at ease (besides the nauseatingly giant scrolling advertisements everywhere).


I understand the crime rate has dropped drastically in New York since the 80's.  Our week was a very agreeable experience for us.  Not once did I scan the skies, desperately hoping Batman would show up.  (Jason might have, for all I know, but not because our lives were in danger.) 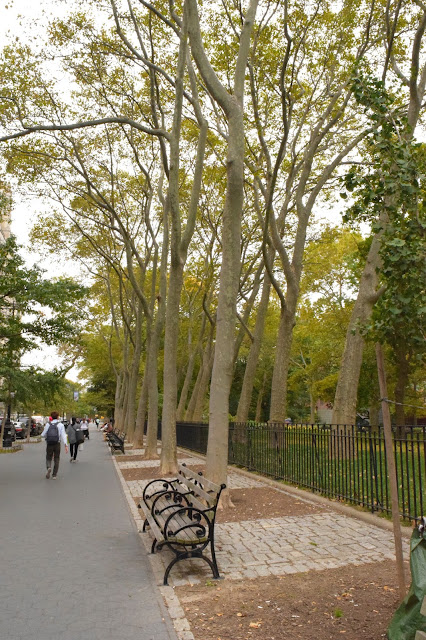 Even the tap water tasted good!  That definitely surprised me.  The picture above is an accurate representation of what we saw:  lots of parks and no litter.


In thinking about what we would see in New York prior to going, I may have criticized Sesame Street for being unrealistic.


A block with no tall buildings, full of nonthreatening adults, children playing freely, and people sitting on a front stoop, that's supposed to be in New York City?  Come on.


New York is all skyscrapers and oily back alleys!  Right? 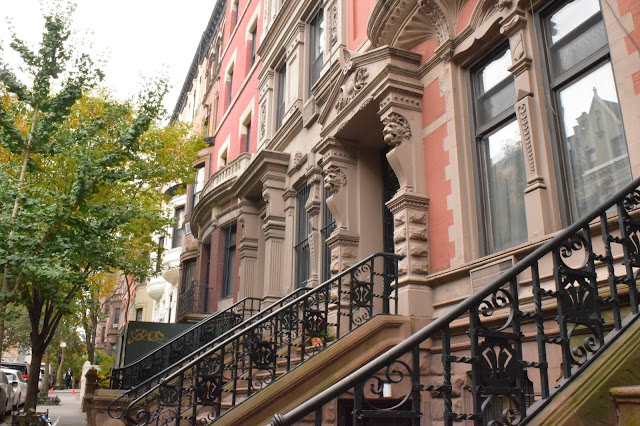 
Did you know there are even some places in Manhattan that have cobblestone streets?  I saw it with my own eyes.  There is definitely more to New York than I knew.


And I doubt not that there are singing monsters and a snuffleupagus in some of these apartments.


3.  There are lots of farmer stands. 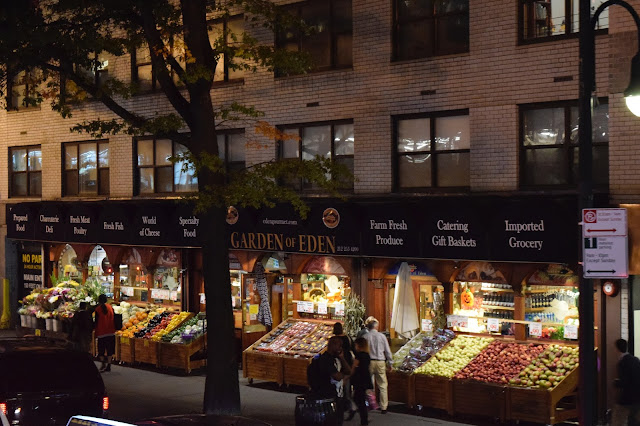 I suppose New Yorkers eat, too, but I didn't consider that they ever eat fresh food at home, rather than in trendy eateries.


There seemed to be a farm stand on every other corner, with great-looking fresh produce, and more selection than the farmer's market in my town, where I can see cows out my window.


I couldn't get over this.  I didn't even know turnstiles could physically do that.  I was really confused our first time navigating the subway because I couldn't find the "exit" turnstiles.  In DC you enter through one set and exit through another, and woe to you if you try to swim upstream.


I suppose New Yorkers have time-efficiency down to such a science that they can get by with one set.  I didn't see any head-on collisions, either, although I did get myself temporarily stuck in one turnstile with my wide-load luggage.


I still can't get over how they make this work.  Talk about a miracle [under] 34th Street.


The most surprising thing of all:  New Yorkers are nice people.


I expected stereotypical brusqueness, especially directed toward a befuddled tourist like I, who understands a lot better how cows work than how turnstiles work.


Sorry to say this, DC, but I expected New York to be more like you:  unsmiling, silent, and dressed in a starchy business suit.


The first few meals we ate were served by friendly waitstaff, and I figured that was a fluke.  Then our tour guide was all friendliness, and extolled the friendliness of New Yorkers in general--but, you know, the job requires it.


When we got food from deli lines, I definitely expected to be impatiently chivvied along, but was met with a smile instead.


Whenever I bumped into someone, instead of silently moving away, they apologized with a smile.


Finally when we were eating breakfast next to a jackhammer on Wednesday, I watched an interaction in pantomime on the nearest street corner that convinced me that the tour guide was telling us the truth.  A family approached the curb, hesitated, and stopped to consult phone screens.  A local man, who was also waiting on the corner, stepped over to them and obviously offered help.  After some pointing and explaining, the family set off happily on their way and the man thereafter got his ride.


I wonder if New York friendliness has gone up since the 80s as crime has gone down.  Or I wonder how much of it has to do with 9/11 and whether that made a big difference in people's sense of camaraderie.


However they manage to do it all in New York, I was entirely impressed.