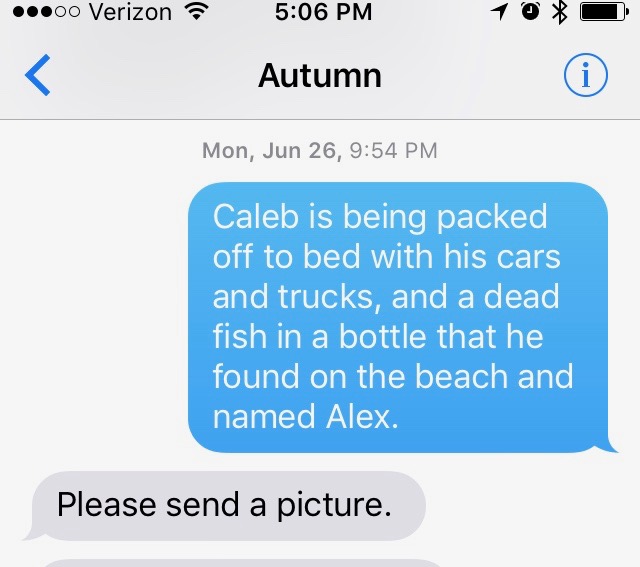 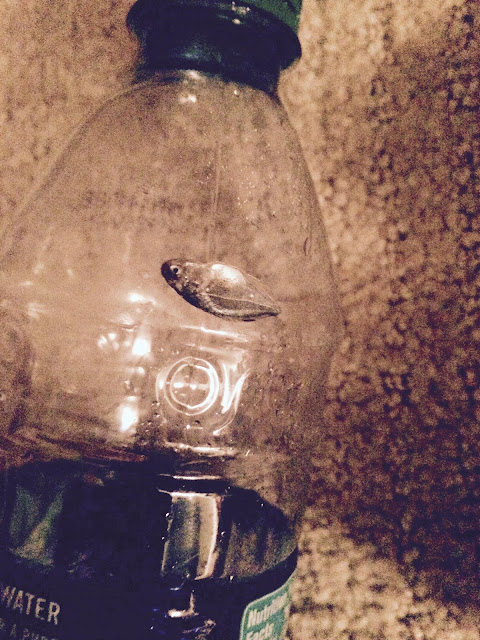 The fish posthumously known as Alex washed up near our inflatable boat, apparently recently deceased.  He was beautifully shiny.


I showed it to Caleb, who was immediately smitten.  He spent the afternoon sitting on the boat, calmly riding the waves, wearing my sunglasses, sucking his thumb, and snuggling the little fish, which stuck to the palm of his other hand, with his pinky.


When it was time to bring all our stuff back to the house, there was some uncertainty as to how to transport Alex (who was obviously NOT going to be left on the beach).  I offered an empty water bottle so Alex wouldn't get smushed in the crush of sand toys.


Alex never left the bottle again, and for all I know, his skeleton is entombed there still.  Or possibly recycled.


The bottle made a convenient place to keep Alex, but it did roll around the floor easily.  When someone said, "Poor Alex is getting dizzy," Caleb responded, "He's not DIZZY, he's DEAD."


I'm glad there were no delusions.


Alex stayed in his plastic tomb under Caleb's bed for the rest of the week--or at least until he was inadvertently thrown out with the trash.


Somewhere around Tuesday or Wednesday, Caleb hugged the bottle containing Alex good night.  Then he looked inside and said, "Oh, Alex, you need a bath."