Indian summer, in which we sleep outside with not a fraction of the skill of actual Indians

Jason and I have recently (this summer) starting leaving the kids home alone with Jeddy officially in charge (though we know Ada's really the boss).


We still haven't gotten used to it. 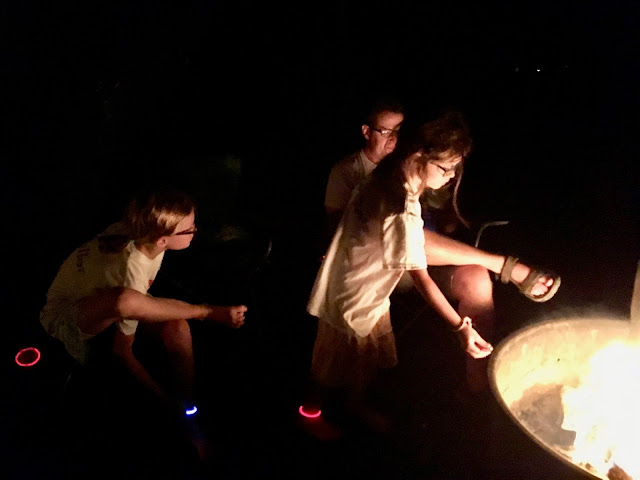 We get all giddy when we leave the house.  The other night we went out after dark with another couple, like a double date, and I felt like a giggling teenager with a late curfew. 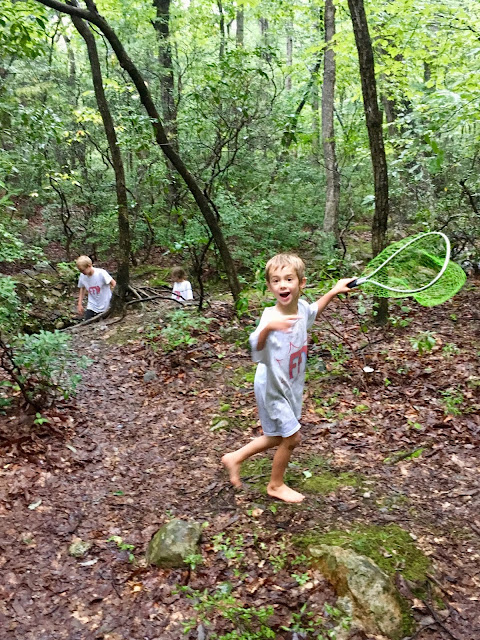 We've gone out for ice cream, to our favorite Mexican restaurant, biking around town... and to the county fair. 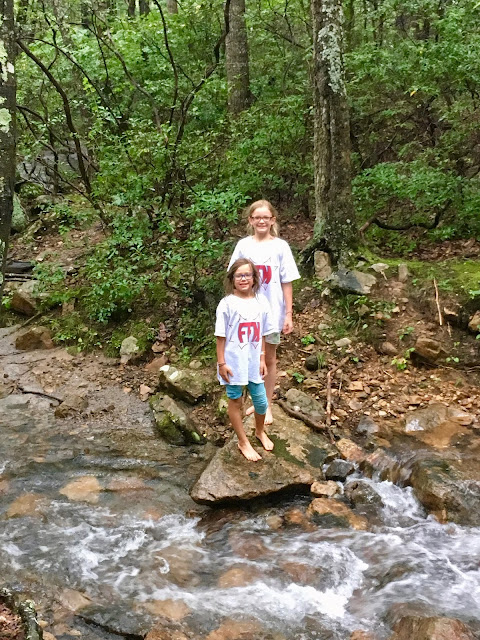 We started our fair visit with the requisite deep-fried fair food:  Philly cheese steak, pork barbecue, funnel cake.  Then we visited the cows (always impressive) and the baby chicks (always adorable) and the bunny barn (how could bunnies be anything but endearing?). 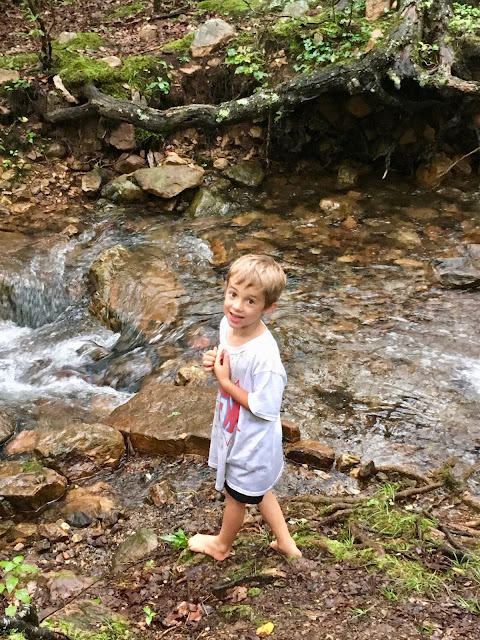 Then Jason indulged me by downplaying his propensity toward motion sickness and riding some rides.  After the swooping hang-gliders he told me he was 20% sick but recovering.  I thought the Ferris wheel would be soothing, but after a spin on that and then the swings that go around in a circle, he was up to 50% and I thought we better stop. 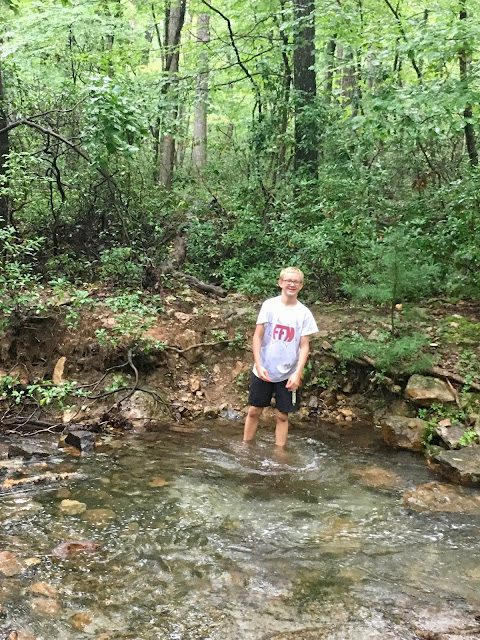 We wandered about and ended up watching the antique tractor pull for a while--which is more exciting than it sounds when one of the antique tractors goes beyond the finish line and bashes through the fence a few sections down from the one you're leaning on.  I never did figure out if that tractor won or lost--I was fuzzy on the rules.  But I did get caught up in the rural glory of it all. 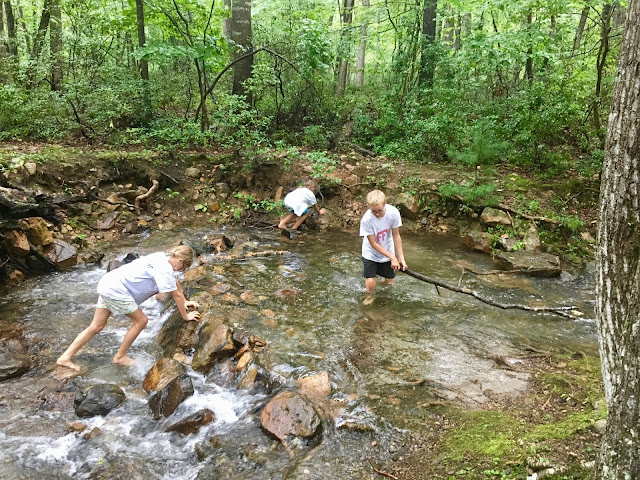 Putting to death my natural inclinations, knowing that my children really wanted to go camping and that it had never happened this summer, we scheduled a camping trip the weekend after the fair.  Jason reserved two nights at a lovely campsite--with bathrooms--right next to a little rushing stream, and near a lake with a sandy beach. 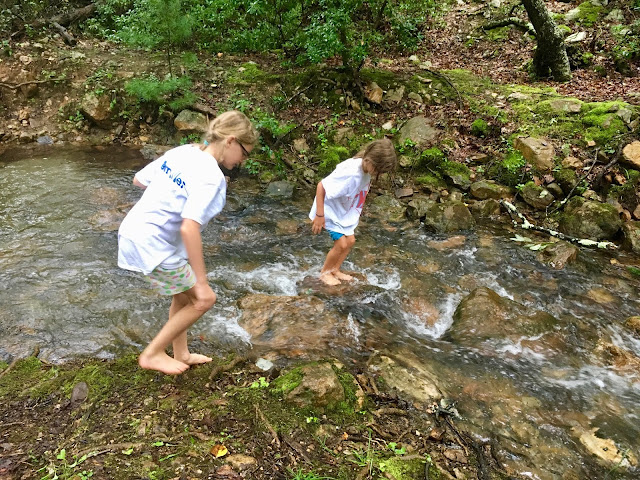 Considering that it has rained like the Amazon every day this summer, it was inevitable our weekend would be no different--but, hey, that's what the tent's rain fly is for, right?


We literally slept in puddles.


Well, that may be an exaggeration.  It was more like punctuated dozing than actual slumber. 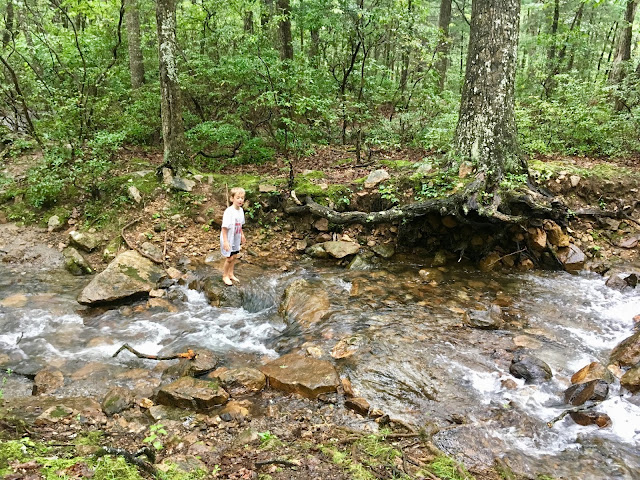 The campsite was wet and therefore muddy when we arrived at dusk, but we got the tent set up quickly, and after the necessary toasted marshmallows, we all settled in.  For the first little while, we reveled in the sounds of crickets, frogs, and the running stream while we drifted off.


Then the storm began.


It went on for at least an hour, and involved nearly continuous lightning, rolls of thunder, and copious downpours.


The boys slept right on through it. 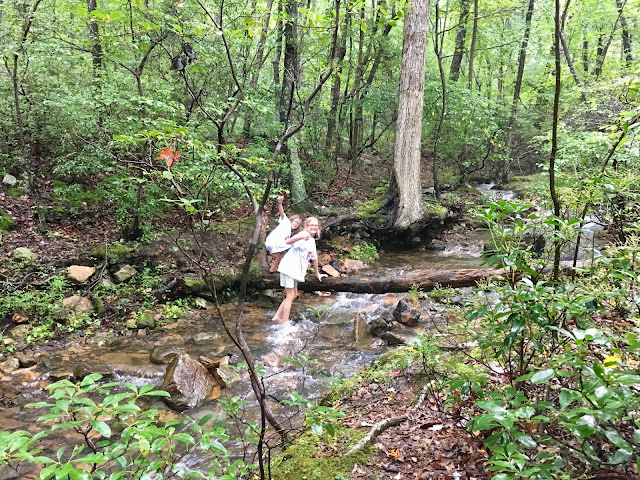 The girls were up and crying.  We were stepping over the boys to zip up the tent windows around them.  I reassured the girls with confidence that we were perfectly safe, then rolled over and whispered to Jason, "Are we ok here?"  Water was seeping in from beneath and blowing in from the sides and dripping in from above.  We zipped up, reassured each other, and pretended to sleep some more.


After several hours, we were still restless (except the boys, who were splayed out flat, 100% unconscious), we were damp down to our underwear, our pillows were wet through, and there was standing water in the tent.  Ada was "sleeping" while attempting to levitate to avoid touching the wet floor--she was perched on her elbows and knees to minimize contact.


Jason finally gave up and went to lay down in the car, where he stayed awake shivering in a different position for a couple more hours (being damp through).


I did my best to ignore the puddles and told myself my pillow wasn't wet, just cool. 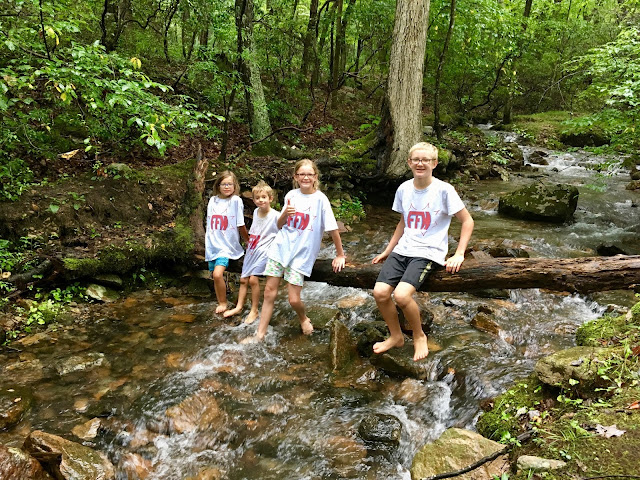 
Jason and I were calculating how soon we could pack up when the rain tapered off and the kids found the stream.  The weather was ridiculously wet but not particularly cold, so before long they were wading in and rearranging rocks into dams.  It ended up amusing us all for hours. 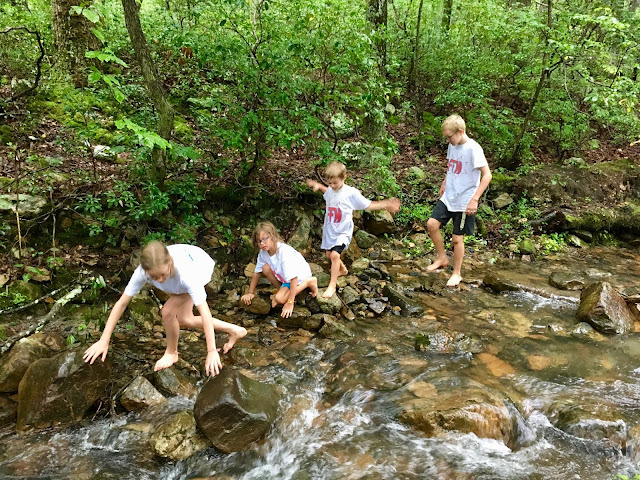 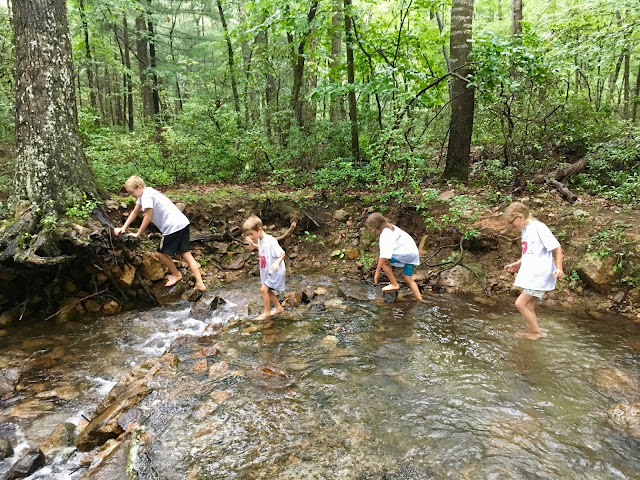 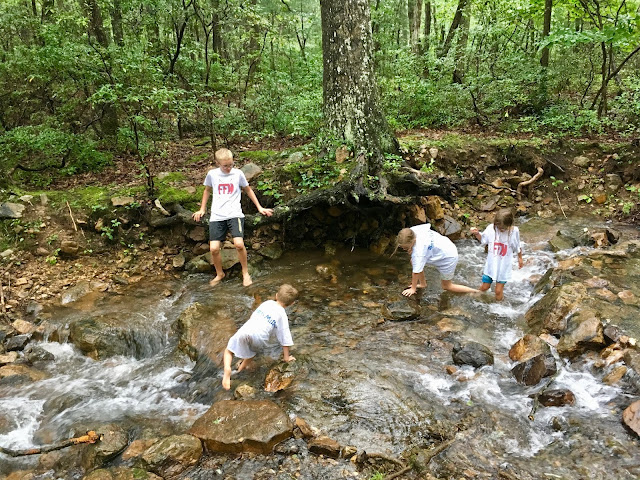 We kept the fire going and had another meal at lunchtime that involved foil-wrapped bread, meat, and warm, gooey cheese.  Then we headed to the lake, where we spent another couple of hours catching salamanders and building them pens in the sand. 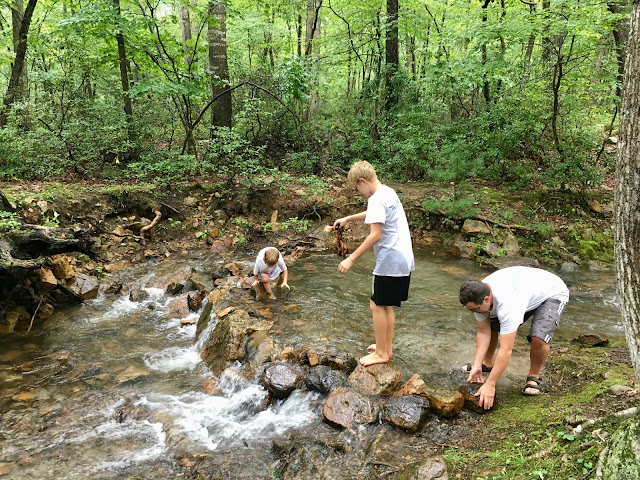 Jason and I conferred and decided to leave while we were ahead, since we definitely didn't want to sleep there again, and dinnertime was hours away.  I took Ada back to the campsite to pack up, and Jason took the others to the playground.  The first thing Caleb did was stick his hand in a tire that, unfortunately, had a bees' nest in it.  Jeddy said he'd never heard Caleb scream that loud, and as Jeddy pointed out, that's saying something.


Thus, the others joined us shortly at the campsite, where we were breaking down everything and throwing it willy-nilly in the car: mud, sand, puddles and all.  Streams of water ran off Ada's sleeping bag when I picked it up.


We were most definitely not sleeping there another night. 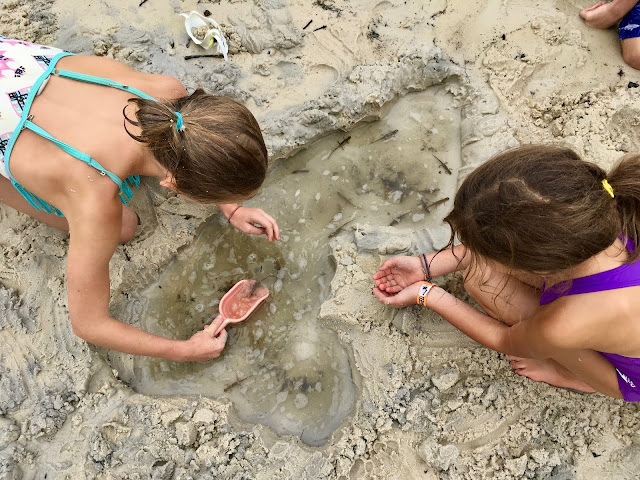 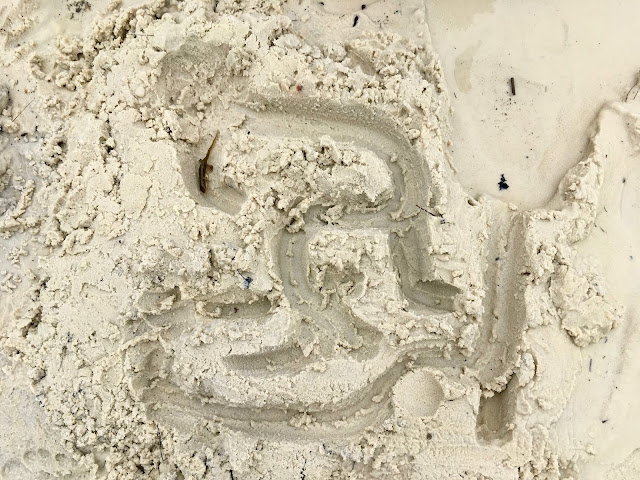 Would you do again?  Well.... I told Jason that I actually kind of prefer it when it rains, because then everyone agrees with me that camping sucks.  Will I do it again?  Yes, I'm sure I will, especially now that my family's expectations for camping fun are about as high as mine are.

Soul, then know thy full salvation
Rise o'er sin and fear and care
Joy to find in every station,
Something still to do or bear.

Think what Spirit dwells within thee,
Think what Father's smiles are thine,
Think that Jesus died to win thee,
Child of heaven, canst thou repine?

-Henry Lyte, "Jesus I My Cross Have Taken"